One of the reasons we located ourselves in San Jose for our five days in Costa Rica is because I love a central market ( notice I used the pronoun “I” and not “we”) . I love to watch and photograph local people gather for their day’s provisions. It’s a social marvel. In a foreign country I believe it is like having an intravenous dose of their culture versus a simple sip you might get from a tour guide.

Our last day was saved for the city adventure. After breakfast we walked the six blocks down Central Avenue to find it. We had no idea what to expect. Some of my favorite foreign markets were in Palma Mallorca Spain, Prague in the Czech Republic, New York City (definitely foreign even if you are from the USA), and Santiago Chile- just to name those which left a firm impression, though there are many more I have absorbed. 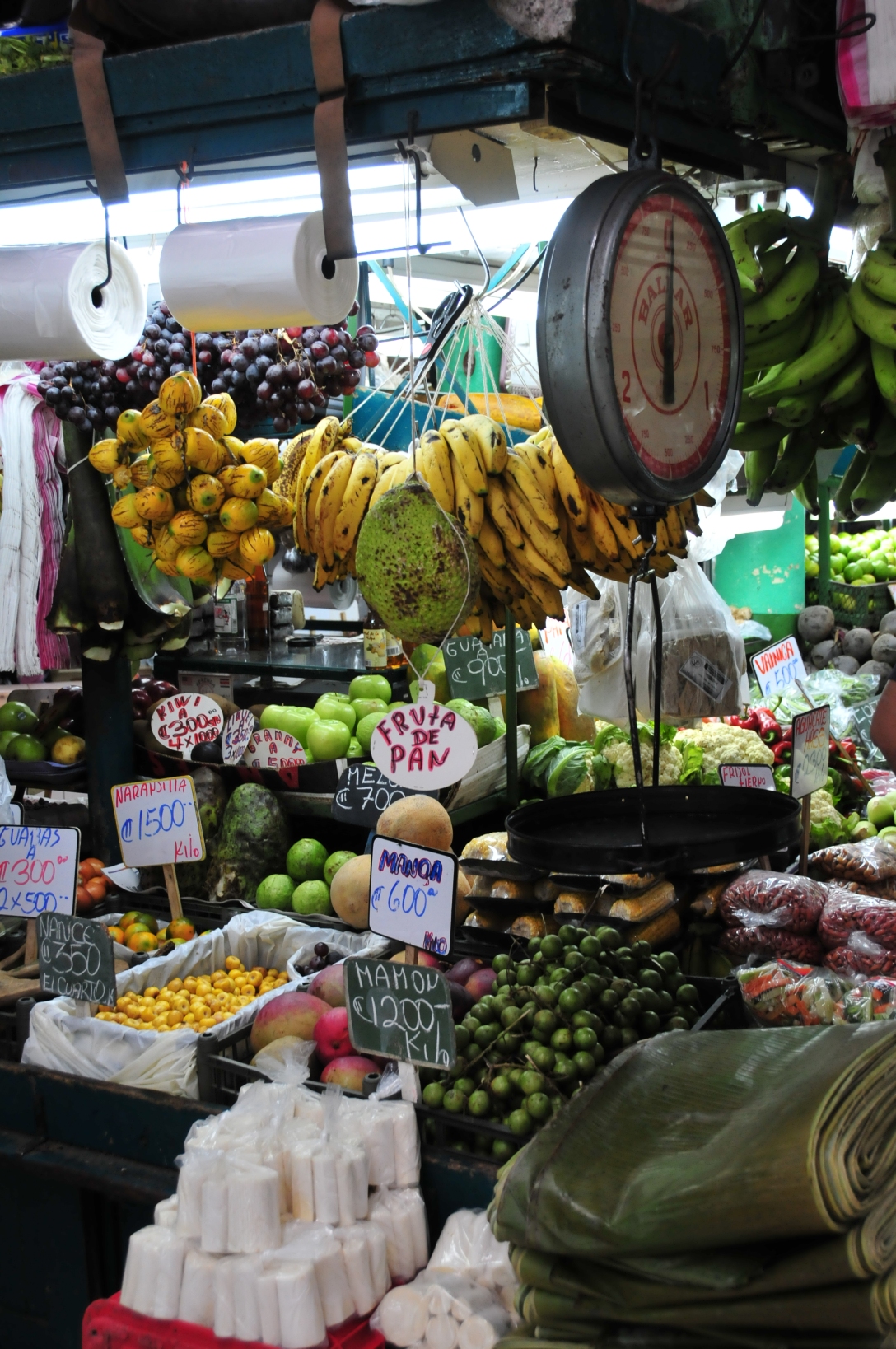 I assumed San Jose’s market would be this vast outdoor activity swarming with locals hovering over their selections, flowers spilling over bike baskets, old women toting rolling carts brimming with vegetables, fishmongers shouting orders,and  locals chatting with friends they bump into-the other important reason for visiting the market- a social life more interesting than a starbucks gathering here in the US. (If I were to suggest an intravenous dose of America I would send a foreigner to a popular starbucks and instruct him to sit and eavesdrop for one hour per day of their visit in the US, and they would know everything about us they need to know.)

What we found was an arch that beckoned us inside a block wide market crammed with crowded stalls creating a curving maze inside. It was dark and dirty, and noisy, but that didn’t steal the charm. It was the most authentic local adventure into the culture we found in Costa Rica. We wandered and saw tropical fresh foods unrecognizable to our North American consumer’s eye, meats, chicken, fish, kitchen items, souvenir junk, coffee, pets and petfood, baby chicks in cages, craft supplies, cleaning supplies, vitamins etc. It was like a primitive walmart. Much more interesting than going to walmart that’s for sure.

It reminded me of two places I have been to: first-the indoor market in Cardiff Wales- when I lived there I had to visit it for any sort of electronic item I needed, as well as the fresh meat for a special meal, or simply to soak up the Welsh culture I loved so much to be able to say was mine for a year.  The second similar venue was the Tokyo fish market, except that was a one product adventure. If you divide the crazy scene of Tokyo’s market’s busy and noise by a thousand what you would get is the Mercado Central in San Jose.

The most intriguing stall was the fresh roots, and herbs of the medicine man. I wanted a lecture. What is this? Que es esto? What is it for?  how much do you use? The man wished to wave me away as I was not a buying customer only a nuisance of a tourist practicing good enough spanish to keep a conversation going despite his hopes it would end.( he wanted to watch tv)  Friendly isn’t an adjective I would use at all for the market, but that didn’t deter my appetite to learn and absorb. My redhair and big camera gave me a little bit of an edge to spark their own curiosity about me, but it was a special Friday and they weren’t in the mood.

I wandered and wandered the maze in the market looking, listening and touching everything I could. Craig had enough of the stimulus long before I was finished. So, I suggested he take his late breakfast. (a grumpy husband is usually a hungry husband) We found the craziest breakfast corner we could find just to see what would happen to us. This is something you must see for yourself so I made a little video:

The woman taking our order had to be eighty. She yelled at us in slang spanish I could barely understand then walked to a hole in the ceiling where she yelled her order up to the kitchen above our floor. When it was ready they sent it down on a dumb waiter. Occasionally someone sprinted up or down the spiral staircase in the corner of the room. Meanwhile everyone within eyeshot had their eyeballs glued to the opening ceremonies of the World Cup. No one was working. Every stall had a small tv installed in a corner and not one worker was shy about ignoring customers to view the world cup. Only the citizens of the United States were more interested in the produce than the games. The city stopped that morning in much the same way our communities halt to watch the superbowl.  Me? I’m not a sports fan, but I am a fan of photographing the sports fanatics and life around them. I make my own fun where ever I go. This market was indeed fun.

Give to Kirabo Seeds